A while back, me and my brother went to a lecture by Magnus Nilsson (of Fäviken fame). It was fun and strange. He was (supposed to be) promoting his book The Nordic Cookbook but began the lecture by telling us he thought it to be a really bad idea making a book about Nordic cooking. Since there is no “Nordic cooking”. However, he then figured someone else would be tasked to write it if he declined. Which would probably make the book be worse than if he wrote it. So… he wrote it. Then he talked about bread for 20 minutes. Then, it got really strange. He claimed that “taco pie” is one of the most Swedish dishes there is. Crazy, right? Buuuuut…. he just might be on to something. In Sweden, taco is a real mainstay in the weekly family menu. Or well… “taco”. Many times it’s just minced beef fried with a spice mix from Santa Maria, coupled with some creme fraiche, grated cheese, corn, some other vegetables and salsa. It’s not bad I guess. It’s… a rouse, a cheap trick, if you know what I’m saying? It’s good in the way McDonalds can be quite good. You eat it and think “hey, this is really pretty good” but then half an hour later you think “was it thou..?“.

Anyway, nowadays we Swedes put “taco” in lots of places where it doesn’t belong. In pies, on pizza, heck there’s even a taco-semla (semla is a weird-ish dessert we eat on Fat Tuesday, taco-semla is just straight up super weird… Also, the nacho-semla was actually a way bigger deal).

So maybe “taco” is actually really Swedish. We certainly are a bit obsessed with it.

I got turned on to tacos when I got treated to some of the stuff from Jonas Cramby’s cookbook of Mexican food. It was decidedly different from the “taco” I’d had before. Real beefy and spicy and smokey, with loads of coriander and lime. Just great. And as with everything when living with a vegetarian: if you find something that’s wonderful but also made from animals, you try to make a vegetarian version so you can eat it more often. After some experimentation, this recipe quite quickly rose to the top. The wonderfully rich black beans are so good with the garlic and the chili. Guacamole is a perfect match and fried cheese… fried cheese is just food cocaine. About 50% of the time I have fried cheese I think: “there is nothing better than this… there can’t be anything better than this“. If I’m drunk I’m certain of it. And really? I don’t think I’m especially off base here. Top it off with pickled red onion, a generous dash of fresh coriander (cilantro) and lots of lime and you have what for me might have become my favorite taco. Maybe it’s because I don’t make the pulled pork version, or the beef one, or the fish taco as much, but I’m not sure… There’s just something about the beans with the cheese and the…. mmmmm. So good. We have it once a week.

Should you really be any different? 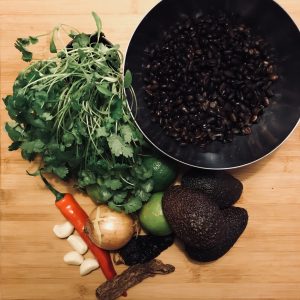 I haven’t included a recipe for the tortilla here. If you want to make it yourself (which I really think you should) I used this one for a long time. It’s good (it’s in Swedish but I think you’ll get it)!

Nowadays I mostly use a simple pizza dough (yeast, water, salt, oil, flour), take about 40 g of the dough, work it to a thin tortilla and fry it in a hot pan for 20-30 seconds on each side.

Put the pieces together. Make sure to add plenty of fresh coriander and a splash of lime juice on top and enjoy. And I almost forgot! Except for the cheese, this is actually vegan. Though fried cheese is just amazing a really great substitute is fried and lightly salted slices of eggplant (and honestly, just adding this to the taco without removing the cheese is also pretty great).

I’ll be back with a pork, beef and a fish taco down the line. Those are also really quite good 🙂