Well it’s not just Greek though right? It’s middle eastern, Turkish, Greek kinda. But you know what I mean. Anyway, this might be my favourite vegetarian dish.

Now, some might question why I’m posting a vegetarian version, instead of the meaty original, so let me just clarify: I absolutely adore the meat version. My cousins father was Greek, so a lot of the food in their mother’s (my aunts) house have always been very Greek.

The moussakas I’ve had there have been just… bonkers good.

So why the black beans? Well, my girlfriend is vegetarian and I just couldn’t stand not having moussaka frequently. Necessity is the mother of invention and all that. But then, I just started liking it so much I’m not even sure which one I prefer any more…

So what’s the deal with moussaka anyway? As with many dishes it’s not one single thing. The corner stones of a great moussaka are the spicing, heavy with all-spice and possibly cinnamon (I say yes to cinnamon btw. My aunt says fuck no, so… don’t say no, say maybe, maybe, maybe, as a famous Swedish song goes), fried egg plant, and a creamy, egg-infused béchamel sauce with plenty of parmigiano!

A couple of things are, according to myself, crucially important.

Just stick to these and you’ll be ok. And the moussaka will be a lot more than ok. 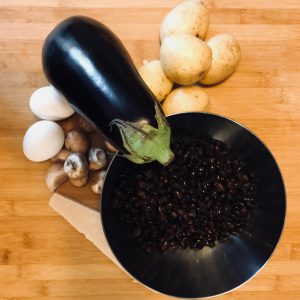 Serve with a nice Greek sallad or maybe even some Tsatsiki!