Bouillabaisse is a French soup. I know, fancy! That is the extent of my knowledge about Bouillabaisse. It is very, very good though. I’m just saying that there might be stuff in the recipe that is deeply disturbing for those of you with a profound historical and cultural connection to Bouillabaisse. If that is the case, I hope you will be able to enjoy it anyway. Hopefully it won’t be like for those dudes who thought that the new(ish) Ghostbusters movie ruined their childhood because it cast women. But maybe it will? Maybe someone’s childhood will be ruined because I am suggesting you to put some crushed tomatoes in a Bouillabaisse? Food and words are powerful things.

The base of the soup is as it is with most soups; a great broth. I really like shellfish broth, so I often use one made from shrimp shells, but any seafood-based broth is good. Besides the broth, what gives the soup its character is the mix of fennel, orange, saffron and white wine. I also think tomato goes really well with all this which is why I put some crushed tomatoes and tomato puré in mine. 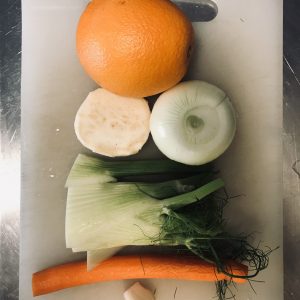 So. Lot’s of ingredients but I promise: not complicated at all.

I really love this dish. And it’s really nice if you’re hosting a dinner party. If you prepare the broth, the fish (by putting it in brine, which you can do the night before if you want) and Aioli beforehand, you can really do this from start to finish in less than 30 minutes.