This recipe originates somewhere in the south of Italy sometime around the seventeen hundreds, when eggplants and tomatoes finally made it in the mediterranean cuisine. They both had existed for quite some time (eggplants coming from Asia in the Middle Age, and tomatoes coming from the New World after it was “discovered”), but like everything new, it took some time to be accepted. Napolitans say it originates in Napoli, sicilians say it comes from Sicily, people from the city of Parma, in the north, swear it’s their invention (yeah, sure), but since I come from the Napoli region, then it’s decided, it’s a napolitan recipe, ok? Ok.

Even if it has few basic ingredients (one of wich, the most important, is of course Parmigiano cheese*), it has a lot of variants; probably every family has its own version, and sometimes even in the same family it can be a matter of discussion. For example in my family, my aunt Tettella fries the eggplant slices after being egged and floured. I only flour them. She uses mozarella, I use ricotta. I love her parmigiana, but I think mine is superior of course. My girlfriend, who comes from a parmigiana-free country (Sweden), and is not usually influenced by such trivial things as “love” and “affection” in her judgement, thinks mine is way better. So it’s decided, the recipe you’re about to read makes for the best eggplant Parmigiana ever. Ok? Ok

*when I say Parmigiano cheese, I mean the real thing, please don’t use any of that parmesan crap, do yourself a favour.

1 and a half hours 6 servings 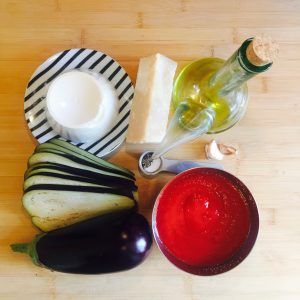 You won’t believe it but in Italy this thing is considered a side dish, something you eat after a big bowl of pasta, a steak, and why not some green salad. I really think it’s a complete dish though, it has everything, and I usually eat it with a side of more Parmigiana. Yep, like two servings. It’s also good to be eaten at room-temperature or straight out-of-the-fridge cold. You can freeze it and then bring it to work in your lunch-box, or save it for those rainy days when you want to treat yourself to something special.