I like Christmas I have to say. All in all, it’s mostly quite cosy and nice. There are things I LOVE about Christmas though. And maybe, just maybe, what I love the most is Jansson’s frestelse (sorry, all my family members, you’re a strong second).

According to folk lore it was invented by the opera singer Per Adolf “Pelle” Janzon, that used to treat his guests to beer, schnapps and this type of gratin (Wikipedia tells me the name might be from a movie with the same name. Let’s hope it’s not that boring).

It’s something so unusual as a completely Swedish dish (I don’t even think it’s got an international name) that I really think should be the envy of the world. It doesn’t seem to be though. I think very few people outside of Sweden have ever heard of it. But hey, up here, it’s one of the seminal holiday dishes. It is essential. It is culture. I’m not sure if people really like it that much though..? But I love it and that’s enough for me.

It’s a bit complicated to explain what ‘Jansson’ actually tastes like to non Swedish people. You see, in Sweden there are anchovies, but they’re not like anchovies in the rest of the world, which are usually salty and preserved in oil (they’re called “sardeller” in Sweden). The Swedish version is very sweet, pickled with a whole bunch of spices like cinnamon, bay leaves, allspice, black pepper, sandel wood, clove, cardamom and some version of oregano. And it’s not made from the fish “anchovy” either, but rather sprat. Crazy stuff, right? But it is the bomb. And these “Swedish anchovies” basically make the dish; the savory, sweet, fatty, salty, wonderfully decadent Janssons frestelse. I love everything about them. Even the can they come in is awesome!

In my family we eat (and always have eaten) Jansson’s on 100% of the following holidays: Christmas, Easter, Midsummer, and on 0% of all the other days. Or, well… sometimes my dad can’t help himself and makes it off-season with like twice the anchovies.

It’s also really easy to make, as all the spicing is already in the stuff you put into the gratin. No added spices, easy peasy. 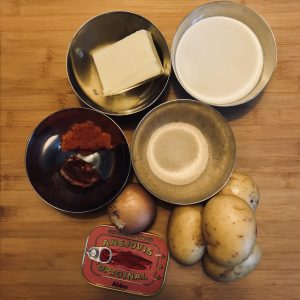 As you might have guessed, I like anchovy. So this recipe does not skimp on the anchovy. For some people this amount can be a bit much. If you think that you’re one of these people, you can skip one of the cans of anchovy and add about 100 g (1 dl) of cream instead.

This is normally had at Christmas with tons of things as a part of the Christmas dinner behemoth. But it’s great with just some good ol’ meatballs and an egg.