This recipe has a singular purpose: that not one person who reads it shall ever buy mayonnaise again.

A loft goal you might say, and maybe a bit aggressive? So what’s my beef with store-bought mayo? Let’s talk.

Mayo is not a thing I grew up with. I’m not really sure where my parents dislike of mayo came or comes from (some general aversion to its unhealthiness I’d guess) but we never had mayo at home. I remember eating smörgåstårta one time (which is like 50% mayo) and absolutely hating it. I immediately blamed mayo’s involvement. Of course I had mayo as part of some burger dressing and what not, but essentially: the first 15-20 years of my life was almost completely devoid of mayo.

I really didn’t know what mayo was or why it was considered (in our house) kinda gross. I certainly didn’t think about it as something you make.

The turning point was when I tried (and failed) to recreate some of my favorite sauces; Amigos kebab sauce, remoulade, some hamburger dressing, without considering that they might contain mayo. Turns out it’s a kinda important part of a lot of sauces. So I read up on how to make it. The general vibe seemed to be that it’s pretty hard and that you have to be very careful. So I was careful. Until I’d made it 50 times and realized that it’s super mega easy and that you don’t have to be really careful at all. This became the starting point of my war on store-bought mayo. So it’s not even about that the kind you buy in the store is bad. I mean, it probably isn’t very good but I really don’t know because why would I? It literally takes minutes to make yourself  and it’s wonderful. 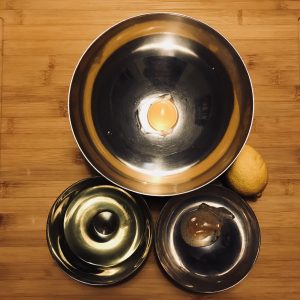 So I’d like to make some general points right off the bat: You can use a good ol’ manual whisk, an immersion blender, an electric mixer or a combination. The thing is, the choice of tool does not only affect the process of making the mayo, but also the resulting consistency. If you only use a whisk or an electric mixer, the consistency becomes gooey and a bit wobbly. Putting an immersion blender to this makes the mayo much more dense and more pasty. The immersion blender mayo is very well suited for burger dressing and stuff like that, as you probably want it to stay in its place. My suggestion is to first use a whisk or mixer and then the blender as it can be hard to reach the bottom of the bowl with a blender.

Another thing: you can use the whole egg instead of only the yolk. This makes for a fluffier and whiter mayo less influenced by the taste of the egg yolk (obviously).

And a final note: I like mayo made with quite sweet mustard, but try different ones. Many recipes use dijon but I have a hard time with dijon in general. As for the vinegar, lemon, salt and pepper it’s completely personal so I’ve elected to not put any exact amounts in the recipe. Experiment! I like the acidity of vinegar but others (my brother for example) prefer lemon juice.

Just to bring this “never buy mayonnaise again”- point home once and for all, I made a video!

Mayo in less than 1 minute:

More oil means thicker consistency and less taste from the yolk (since it’s diluted the more oil you have). But one yolk can bind a heck of a lot of oil, so it’s basically just preference how much to use. This, I assume, is also why stor bought mayo is almost completely white: very high oil to yolk ratio (egg is expensive).

The best thing of all? When you’ve come this far, it’s so easy to make all these great things!

You like Aioli (come on, who doesn’t)? Mix in som garlic and there you go! Chili mayo? Add some fresh chili, a generous dollop of Sriracha and you’ll be amazed. Truffle mayo? You get the idea.