In 2006 Mark Bittman, food writer for the New York Times, revolutionized home-bread-baking by introducing No-Knead Bread. Actually he just shared the recipe invented by a New York baker, Jim Lahey. No-Knead bread was a fool-proof miraculous loaf that tasted and looked much better than any other home-baked bread, as well as many of the fancy stuff at your local bakery. Super easy to make, it needed no kneading and no attention whatsoever, only a few minutes of action plus some waiting.

One and a half years later, my favourite food blogger, Kenji Lopez-Alt of Serious Eats (at the time writer at Food Illustrated) perfected the recipe adding a faux-sourdough touch to it. He did it by substituting part of the water with some white vinegar and beer, you now, to give the bread that tang and complex yeasty flavour. Well it worked perfectly. I’ve done this recipe so many times, and it never fails. It is quite important to use a cast-iron pot (enameled or bare is the same) to achieve an optimal rise and a crunchy crust, but if you don’t have it, the bread will be still very good using the oven as usual. 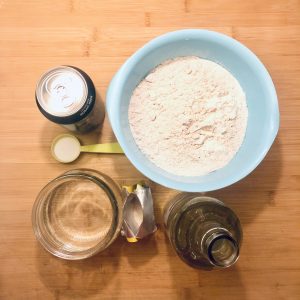 The process is quite long but easy: I usually mix the ingredients before I go to bed, and bake it the next day after work.  The dough is gonna be quite loose (85% hydration) and therefore a bit difficult to handle, but there’s not much handling involved really. Here we go: