We’re not getting around the most Swedish of the Swedish foods right? Nope. As a Swede I don’t have that strong of a bond to meatballs. I mean, they’re pretty great and all but I eat them on holidays like Christmas and sometimes I make’em at home (but really, it’s quite rare). I think my most common interaction with the little suckers is when I spend time with my girlfriend’s nephews because listen: “Mamma Scans köttbullar” is the bleeding bedrock of any household that includes kids. Back in the day I ate those type of meatballs as well (not that much though). They weren’t that great really. Lately though, I personally think they (“Mamma Scans”) have improved somewhat. But whatever, let’s get on with it.

In my opinion, Swedish meatballs should be made with quite a lot of onion, some sweetness and above all have a really smooth taste. The smoothness comes from a mix of cream/milk, egg and bread of different types. Some recipes use potato (grated, either boiled or raw) which plays a similar role. A friend told me that his grandpa, who in his family is the often challenged but ever undisputed champion of meatballing, put potato purée in his. Not mashed potato, potato purée, the finished product. Top marks for ambition and originality (btw: I imagine that’s a pretty good idea actually).

Anyway, here’s how I make mine. 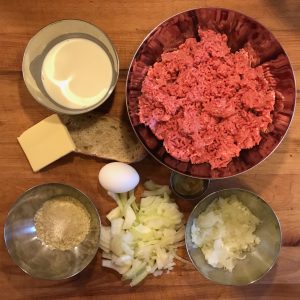 It’s all a bit confusing as a Swede – the talk about Swedish meatballs. But, it’s really good, especially with some killer mashed potatoes, chanterelle sauce and lingonberries or maybe pickled cucumbers. Mmmmm. So make ’em for gods sake. What could go wrong?