Sometimes… most of the time..? All the time?! No, probably most of the time, the simple stuff is the best. Cod, potatoes, butter sauce. That’s perfect, isn’t it? I think so. I’m going to complicate stuff a bit (duh) but the basis of this dish is really simple. A few ingredients and very straight forward flavors.

We eat a lot of fish in Sweden and cod is kind of the king of the fishes. Or something. I tried to find the translation for this specific part of the cod (the back fillet) but I… well I failed. Maybe the English-speaking world does not make the distinction?

In this recipe I’m cooking the fish with the sous vide technique but it’s brilliant pan fried as well. It’s just a little bit easier to get it just right when using sous vide. Btw, I use the ANOVA sous vide machine, which I can really recommend.

So what’s the deal with sous vide? Well, it’s pretty straight forward. Vacuum seal something in a plastic bag with some spices and/or butter or whatever you think might be good. Then put the bag(s) in a temperature controlled water bath at the exakt temperature you want your meat/fish/veggie/whatever to be cooked at, and leave it in there for a long time (as compared to the cooking time using more “traditional” techniques). I think it’s pretty rare to get well prepared fish at “not-high-end”- restaurants, and actually also at many higher end restaurants. Why? It’s almost always overcooked. Dry, overcooked fish is… I mean, it’s not horrible or gross or whatever but it’s just such a waste, right?  When it’s juuuust right, it’s almost falling apart, it’s cooked through but only just so and it’s brilliant. When you’ve had that perfect thing, the overcooked one is such a sad reminder of what could have been. With sous vide, it’s so easy to get it just as you want it and basically impossible to fail. So you should really try it.

1 hour for the cooking. Simple preparations to be made a couple of hours before cooking starts. 6 portions 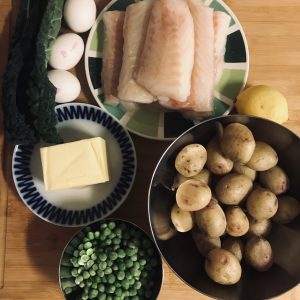 A couple of notes.

If you use frozen fish (I did), be sure to thaw it gently. The meat easily becomes a bit thready and chewy if not treated carefully.

Why all the salt? First of all: It’s not to make it taste very salty. It just gets…. tastier. A bit salty, yes, but not at all over the top (promise). I thiiiink it’s due to osmosis. The salty water is pulled in to the potato due to the higher ion-concentration in the water as compared to the water in the cells in the potato. The salt water adds moisture and saltiness to the potato, much like brining (it is basically brining).

So that’s what I think, but the internet gives… differing explanations. Some say it (the better taste) is due to the potatoes being cooked at a higher temperature (the salt raises the boiling point of the water), but this seems implausible to me as the temperature is very marginally higher. Some do say osmosis but that also doesn’t seem quite open and shut.

In the meantime? Get good at making cod and hollandaise. You’re in for a lifetime of tasty joy!