If we decide we want to give meaning to words, you can’t really make good pizza at home. And by pizza I mean proper pizza, you know, the one invented in Napoli in the seventeen hundreds: it needs a brick oven that reaches 450° celsius (so that the dough cooks quickly and doesn’t get too crisp), very specific ingredients for the topping, and so on. Because of course, in time pizza has become literally everything, there’s even people that put kebab on it, imagine.

However, a loophole exists, and it’s what we’re doing here: fried pizza. Or well, a version of it. Fried pizza (pizza fritta) in Napoli is pretty much as popular as regular pizza, often regarded as street food. In it’s highest form, it’s a huge stuffed pizza deep fried in a big pot of oil, basically a big fried calzone. But in some different iterations, fried pizza can be miniature pizza, fried in a pan with a more reasonable amount of oil, and then topped -or not- with a simple tomato sauce and parmigiano. In a way, this is a better kind of pizza, as far as make-at-home pizzas go.

The dough recipe is the same one used by the Official Napolitan Pizza Association (intended for regular brick oven-baked pizza), and it calls for a very small amount of yeast, and as a consequence, a long rising time: this is why the dough becomes so soft and puffed up. 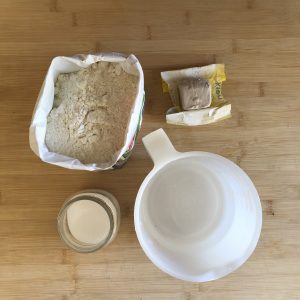 Now is time to prepare a simple tomato sauce for the topping:

You can of course eat the fried pizza without any topping (just an extra sprinkle of salt), improvise with your own choice of toppings, and even make stuffed little fried pizzas. But please, no kebab.