This past May my whole family went to Lisbon. Lisbon really has some great food that is actually slightly Swedish sometimes. Lot’s of potato and lot’s of cod and… well, that’s about all that was slightly Swedish I guess.

More importantly: they have Pastel de Nata. It’s kind of the Danish pastry of Portugal or something. We had it at the wonderful Pasteis de Belem (where they’re called Pastel de Belem) and Confeitaria Nacional as well as at street corner cafés and pastry shops. It is a kind of puff pastry base… I think. I’m really not quite sure if it’s puff pastry, filo or maybe something in between. It’s brittle and flaky and just great. The filling is a cinnamon infused custard and, I think, some vanilla. They’re topped of with cinnamon and icing sugar (if one so prefer). Pastel de Nata’s are kind of…. plain tasting. Not in a bad way, just very… smooooooth. And somehow just wonderful.

Back in Sweden, I inquired the internets in search for the perfect recipe. Alas, I was left pretty frustrated. The thing is, at the best places we had them, they were actually not very sweet. You could of course go crazy with the icing sugar, but the custard was a bit sweet but not really dessert sweet. I just felt that all the recipes I found used at least two times the appropriate amount of sugar. And while that’s also good, it’s not the thing I fell head over heals for.

This is my best approximation of how I remember them. Enjoy! 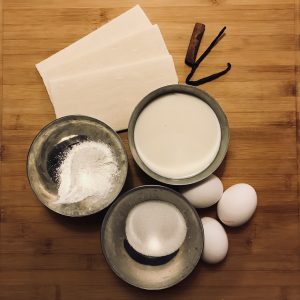 So I use ready made puff pastry in this one which…. isn’t quite right. It’s not really quite puff pastry in the real one so I’ve been searching for a good recipe. This one is excellent and I really recommend you to try it. It gives a crispy crust and it’s pretty easy to make.

After several ok-tasting but not really successful attempts to revive the Pastel the Nata’s I so fondly remembered, I tried once more. The starch, the whole egg, maybe the thinner puff pastry, I’m not sure..? But this time I finally just felt “right… that’s how they tasted”.

That said, you can obviously one up this recipe by going to Lisbon and have the real deal, to which I am quite sure, the above imitation cannot hold a candle. For me though, even a decent counterfeit is something to treasure.

So there you have it: a decent counterfeit of a completely wonderful Portuguese gem.