This is a real Swedish classic. As in Britain, also in Sweden a “pudding” can be both a dessert and a savory dish (unlike in Britain it can also mean an attractive person). This is… kind of a gratin I guess? There’s another traditional thing in Sweden called Cabbage pudding (coming on the blog sometime in the future), which is completely different from Salmon pudding so the Swedish word for savory “pudding” doesn’t mean much more than “stuff put together in an oven shape”, at least not to my knowledge. As you never now how traditional something you perceive as traditional really is, I did some light googling to get a sense of the history and it does seem to have been around quite a while. It is mentioned in the early 19th century, thou I would guess the recipe has gone through some changes since then. Presumably lemon wasn’t something that people had in general. On the other hand, maybe Salmon pudding wasn’t something ordinary people had? The good news is that all you ordinary people can have it now!

As it turns out, it’s also perfectly adapted to modern society as it’s an ideal lunch box meal. Easy to divvy up in pieces, well suited to be reheated in a microwave and you know…. ridiculously good, which is a big plus in my book.

It’s also one of these dishes that almost makes itself. Yes, there’s a bit of light seasoning but for the most part, the flavors come from the ingredients themselves and there’s not many of those. The only real hassle is slicing the potatoes and the onion which is why you should really have a kitchen mandolin handy. 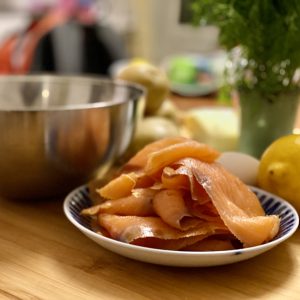 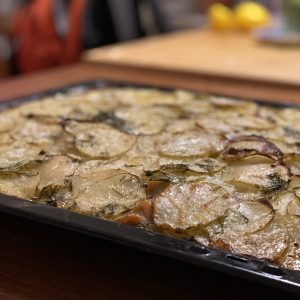 This is actually a sort of summer dish, probably because of the fresh dill, but don’t let that stop you!