New Yorkers have a bit of a fixation when it comes to bagels: they say that you can only eat a good bagel in New York and everything else is crap. I once met a guy who invented some kind of machinery that was able to replicate the exact chemical structure of New York water, to be able to do NY-style bagels in California… It really sounds like with me and pizza actually, so I can understand them perfectly. But to be honest I can’t see much of a difference between my bagels and the ones you would buy, say, at Absolute Bagels on the Upper East Side. But hey, I’m a profane here! I tried a few different recipes from the web and ended up with one that I think works very well despite being a lot simpler than most.

The bagel-making process is quite fascinating, as it calls for boiling the dough before baking it. Yes, boiling. I donno of any other kind of bread or baking product that contemplate such a thing. I can almost imagine, sometimes in sixteenth century Poland, an old jewish baker dropping some dough in boiling water by mistake and than thinking ‘what the hell, let’s bake it anyway and see what happens”. Et voilà!

Yes, bagels are a traditional bread originated in the Jewish community of Poland and later exported to the US. They have a characteristic chewie texture, a crispy and shiny crust, and the delicious smell of freshly baked bread. And they’re my favored bread of choice when it comes to breakfast or brunch. Egg, bacon and cheese are a good topping, but my favourite is of course cream cheese, salmon, tomato and avocado! 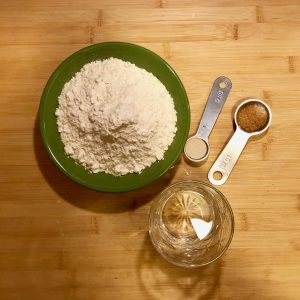