Polpette (italian for meatballs) are probably the reason why, sometime in the future, a war between America and Italy will start. This is what will happen: a random american tourist sitting at a restaurant table somewhere in Italy will order Spaghetti with Meatballs. The waiter, having to explain for the millionth time that Spaghetti with Meatballs is not an Italian dish, will loose his brains and kill the american, burn his flag (american tourists always go around with an american flag), and nuke the closest McDonald’s just because.
Well it’s true, Spaghetti with Meatballs is not an Italian dish. Maybe, just maybe, in some very small town in a very small region of Italy someone eat them, but that’s it. Apart from that, they don’t really exist. It seems to be an Italian-American thing. I can imagine how it happened: this Italian immigrant started a restaurant let’s say in New York, and cooked polpette (Italian for meatballs), but some client argued that “Hey, paisà, where’s my pasta?”, because of course Italy equals pasta, and the immigrant had to start putting meatballs on pasta.

But you know what? Feel free to eat them as you like, I will probably stick to the rule, mostly for romantic reasons: when I was a kid my Aunt Maddalena cooked for me the best meatballs ever, and she had a secret for her meatballs: a lot of bread! Probably more bread than meat, maybe because Zia Maddalena didn’t have a lot of money to buy meat, or most likely because with a lot of bread the meatballs came out soft and flavourfull. So here’s my recipe for Meatballs in tomato sauce. Again, you do as you feel like, but please be advised: waiters in Italy get angry easily. 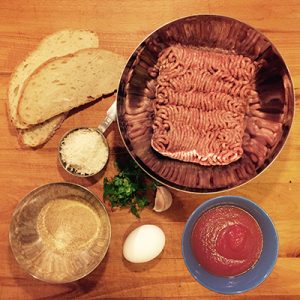 After some research, I came to the conclusion that Italy is the only place where the traditional meal is divided in primo-secondo-contorno-frutta.
Primo is usually a pasta dish, or it can be a risotto or rice soup dish.
Secondo is fish or meat or some elaborated eggs or cheese or vegetable dish.
Contorno is a side dish: it can be a salad, some simple steamed greens, or other simply cooked vegetables.
Frutta is of course fresh fruit, usually one piece.
Especially for lunch, this is what you get at an italian table. Probably not in the big cities where the labour market of the globalized times has changed habits, but for the majority of suburban Italy it’s still like this (i.e. my parents’ lunch)

My point here is, Italian meatballs are a secondo, and probably in the globalized world we live in today, they don’t make a lot of sense as a stand-alone dish. They need some contorno to accompany them. I would recommend some simple fried diced eggplants, or some good aged cheese.