So we’re going back to my childhood again. Well… maybe not childhood. My mom really wanted to cook nice food for various vegetarian (girl)friends that me and my brothers started bringing home at some point. And nice food to my mom meant no store bought, ready made stuff, no short-cuts, no I-can’t-believe-it’s-not-meat… stuff. You know? Real stuff.

I have no idea where she got these ones from, or if they’re something she more or less came up with herself, but they became a real staple food at home. The base is red lentils but I think what give them their defining character is rather the mix of root vegetables that result in a sweet, earthy taste which I became really fond of.

What’s a bit weird is that despite making them regularly for, well, fucking twenty years, I’ve never really settled on a pairing. Sometimes, it’s roasted potatoes with bearnaise sauce. Other times it’s the wonderfully Swedish “stuvade makaroner”, i.e. macaroni boiled in milk, or perhaps mashed potatoes with browned butter. So you know, throw em in somewhere and see how it feels. 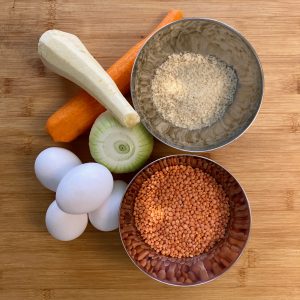 Making these ones are ridiculously easy. The only thing to really learn is how the consistency should feel to make the burgers keep their shape, but not be too compact when fried in the pan. I’ve included pictures and a video to help but as ever, practice makes perfect.

Obviously these can be endlessly added to and experimented with, but I wanted to give you the base, the original, first.

I often add feta cheese, fresh herbs (thyme is a good one), as mentioned in the list of ingredients but not in the instructions; mustard and/or tomato puré